Zen (‘Dhyana’ in Sanskrit) goes back to the experience of Shakyamuni Buddha, who in the fifth century before our era awoke while sitting in the zazen posture . This experience has been transferred from master to pupil without interruption, resulting in the Zen line.

In the West, the cultural and folkloristic aspect of zen gained fame at the beginning of the twentieth century through, among other things, the martial arts, the tea ceremony, the art of flower arranging and the famous Japanese gardens. But although the depth of Zen’s philosophy and the purity of its aesthetics have inspired many artists, writers and philosophers, there has never been a practice of the true Zen . It is only the fruit of a seed that was planted several centuries ago in the earth of Japan.

But what is the seed? What is the creative source of all these fruits?

Zazen is the secret of Zen

The secret of Zen is practicing zazen. Zen does not exist without the personal experience of the practice of zazen . The Japanese word zazen means ‘sitting meditation’. 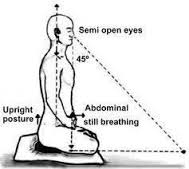 You sit in the middle of the zafu (round cushion), with legs crossed in lotus or half lotus position. If you find that difficult and just sit cross-legged, make sure that the knees are pressing on the floor. The pelvis is tilted forward at the level of the fifth lumbar vertebra. With the back stretched, the chin pulled in, the neck long, the nose and the navel on one vertical line, you push the knees on the earth and the crown of your skull against the sky . Place the left hand on the right hand, the palms facing up. The thumbs touch each other and form a horizontal line. The hands rest on the feet, the edge of the hands is in contact with the abdomen. The shoulders are relaxed. The tip of the tongue touches the palate. The gaze is on the ground about a meter away, but without really looking at anything.

Zen breathing is similar to no other and is called ‘Anapanasati’ in ancient Sanskrit. It only occurs with a correct sitting posture. The rhythm of breathing is slow, powerful and natural, and based on a soft, long and deep exhalation . The air slowly and silently leaves the nose while the thrust of the exhalation goes powerfully to the belly. At the end of the exhale comes the inhalation itself. The masters compare the zen breathing with the mooing of a cow or the exhalation of a baby that begins to cry immediately after birth.

When we sit in zazen, we let the images, thoughts and mental constructions that rise from the unconscious pass through like clouds in the sky – without oppose or cling to them. Just like reflections in a mirror, the images rise again and again from the subconscious and disappear. In this way you arrive at a deeper layer without thoughts that transcends all thoughts: Hishiryo , true purity.

This mental attitude is the natural result of a deep concentration on posture and breathing . She provides a better circulation of our brains and a check of our mental activity. During zazen the cortex (the seat of conscious thinking) comes to rest. The blood rushes to the deeper layers of our brains, making them better cared for and awakened. Their activity gives a sense of well-being, serenity and tranquility, and triggers the brain waves ‘alpha’ and ‘theta’ of deep sleep with full vigilance.

‘Zazen is simple, yet very difficult to understand. It is a matter of doing and repeating – just like life. When you are sitting without purpose or profit, when your posture, your breathing and your attitude of mind are in harmony, then you understand the true Zen , then you possess the Buddha nature.’