If you expect the least trace of conformity, conventional attitude or stereotypical behavior from the monk Kosen, you will be disappointed: he does not have one. The monk Kosen is part of the tradition of great iconoclastic masters: free from any yoke, freed from every dogma and always challenging. 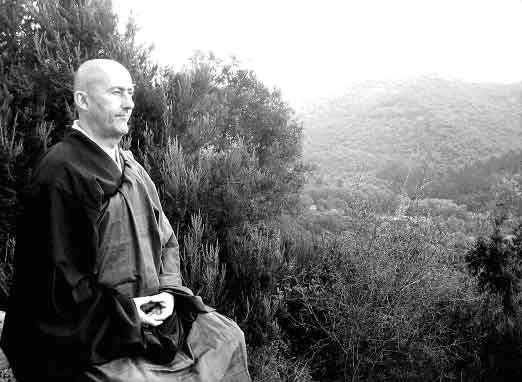 Stephane Thibaut, that is his birth name, started his stormy life in 1950 in Paris. After many experiences in the turbulent world, his path crossed that of the practice of transmitted Zen, and in the person of the man who brought this practice to the West, the “Boddhidarma of modern times”: Master Taisen Deshimaru.

Stephane is then 19 years old. He became his follower, shaved off his long hair and received the ordination as a Zen monk . From then on he devoted his life to the practice of Zen and followed his master everywhere, until his death 15 years later. In 1984 he received the transfer ( shiho ) from Master Niwa Zenji, the highest authority within the Soto Zen in Japan. He became the 83rd successor of Buddha Shakyamuni in the tradition of the Soto Zen . Since then an international sangha has formed around him.

Kosen leads a growing number of dojos, gives conferences, set up a revolutionary website and continues the mission of his master in various ways: revealing the treasure of the true zen to mankind.

In 1997 he published his first book: La Révolution Intérieure or The Inner Revolution .

In 1999, with the help of the entire Sangha in Argentina, he founded the first Zen Temple of South America, Shobogenji . In 2008 he founded the temple Yujo Nyusanji in southern France .

From Europe to South America and from Cuba to Canada, many disciples follow his teachings, from sesshin to sesshin, and from continent to continent.

From 1995 to 1999 he lived in Amsterdam. He then settled in France, where he personally led the Zen Dojo Montpellier .